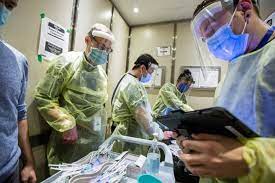 Ontario’s health minister has directed regulatory colleges for nurses and doctors to develop plans to more quickly register internationally educated professionals, a move nursing groups and critics say falls short of the premier’s promise to do everything in his power to address an emergency room staffing crisis.

Sylvia Jones sent directives Thursday to the College of Nurses of Ontario and the College of Physicians and Surgeons of Ontario directing them to make every effort to register those nurses and doctors “as expeditiously as possible” so they can practice in the province and provide reports in two weeks on how they will accomplish that.

The minister also directed the nursing college to develop supports for the internationally trained nurses — for example, to bring their skills to Ontario standards — to allow them to practice “in a timely way.”

Hospitals have been under strain in the province in recent weeks, with some emergency rooms forced to close for hours or days at a time due to staff shortages. More temporary closures are expected this weekend in Clinton, Ont., and St. Mary’s, Ont.

Nursing groups, hospital executives, other health-care professionals and advocates have said that burnout after being on the COVID-19 front lines for more than two years and not being properly compensated have caused people to leave the profession in droves.

Cathryn Hoy, president of the Ontario Nurses’ Association, said the system will benefit from more internationally trained nurses, but she wants to see the report from the college before assessing whether this particular directive will help.

As well, she said that the news of the directive alone does not amount to Premier Doug Ford doing everything in his power to address the staffing crisis, as he promised at a news conference Wednesday.

“This still goes hand in hand with Bill 124,” Hoy said, referencing legislation passed in 2019 that capped wage increases for public sector workers at one per cent for three years.

“You’re going to bring all these internationally trained nurses in, which yes is going to help because they’re nurses, but at the end of the day, who is going to support them and orientate them and mentor them, because there are not enough nurses to do the work that we need in Ontario? So we need to get the retired nurses back and the only way you’re going to get that is if you repeal Bill 124.”

Ford indicated Wednesday that he would not be repealing the wage restraint legislation or increasing a US$5,000 retention bonus for nurses. He also noted that the provisions of the legislation expire and won’t apply to the next contract negotiations for nurses.

But Hoy has said if Bill 124 is scrapped, the current contracts could be renegotiated.

CEO of the Registered Nurses’ Association of Ontario, Doris Grinspun said she is delighted a directive has been issued and hopes it leads to clearing a backlog of international nurses waiting for registration that she pegs at 26,000.

“That’s the retention tool that is hurting more than anything,” Grinspun said. “Not only do we need to bring more nurses, we need to retain them here and that bill does not allow us to retain nurses here.”

Interim Liberal leader John Fraser said issuing the directives is a small step the government should have taken months ago.

“It’s evident that the government has done nothing up until now to actually increase the number of foreign-trained medical professionals in this province,” Fraser said.

“Then to say to a regulatory body, ‘Come up with an idea in two weeks.’ Should not the Ministry of Health be saying to the college, ‘Here are the kinds of things that we think you should do’? Not, ‘Come up with a plan?”‘

NDP deputy leader Doly Begum said in a statement that the directives are “weak” and need to come with action.

“Ford and Jones have not provided funding or a pathway to finish the credentialling of doctors and nurses who want to work in Ontario,” she wrote. “We cannot afford more vagueness.”

A 2020 report from Ontario’s fairness commissioner showed that 14,633 internationally educated nurses were actively pursuing a licence through the College of Nurses of Ontario. That same year, just over 2,000 international applicants became fully registered members.

The nurses’ college has recently taken steps to speed up the process, including changes to language proficiency requirements and a partnership with the province to create more supervised practice opportunities, a spokeswoman has said.

That programme has seen 762 nurses added to the hospital system since the start of the pandemic, the government says.

The college has registered a record number of nurses this year, including more international nurses than in previous years, with 4,728 registrations by the beginning of August, though that number doesn’t indicate how many of those nurses are now working in Ontario.

The college also says it’s looking at ways to streamline the process. In order to practice in Ontario, internationally educated nurses have to show that they have recent experience, pass exams, and demonstrate English or French proficiency.

A spokesman for the college said it is working on a response to the directive that will provide more details about its plans for internationally trained nurses.

“One area we wish to continue to explore with system partners in academia and government is the need for targeted courses to address applicant education gaps, often an ongoing barrier to registration for IENs,” Bradley Hammond wrote in a statement.

admin14 hours agoDecember 1, 2022
36
By Andy Fry French competition body, the Autorité de la Concurrence, has rejected discrimination complaints from pay TV broadcasters Canal+ and beIN Sports regarding the award of live Ligue 1 broadcast rights to Amazon last year. The Autorité cited lack of sufficient evidence that rights holder the LFP had acted improperly in doing the deal. Amazon secured the rights in question after the LFP and Mediapro agreed to end a pre-existing contract early. This allowed Amazon to step in and secure a three-year deal (2021/22 to 2023/24) for €250m(US$263.13million) per...

admin22 hours agoDecember 1, 2022
27
By Godson Umejiego, Bureau Chief The Federal Deposit Insurance Corporation (FDIC) has issued the lists of institutions scheduled for a...

admin4 days agoNovember 28, 2022
48
Latin American telecom regulators are seeking to create clearer rules for the use of non-licensed spectrum, as disputes between mobile...