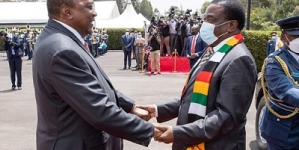 From Arnold Mulenga in Lusaka, Zambia

WHETHER the United States is establishing a military base or setting an office of security cooperation in Zambia, the development has sent shockwaves in the Southern African country.

This has triggered apprehension in a region long opposed to the military presence of the Americans.

The diplomatic gaffe comes weeks after the country’s relations with Russia were ruffled as the new government of President Haikande Hichilema voted in favour of a resolution condemning Russia’s invasion of Ukraine.

The apparent policy shift since businessman Hichilema assumed power in August 2021 is a far cry from Zambia’s revered standing over the years as a catalyst for the liberation of most of Southern Africa, its stance against imperialism and its commitment to the policy of non-alignment.

Zambia, hailed as a beacon of peace and stability, but lately beset by some political upheavals, has been tense since the United States government of President Joe Biden announced the US Africa Command (AFRICOM) will open an Office of Security Cooperation at the Embassy in Lusaka.

Deputy director for Strategy, Engagement and Programmes Brig. Gen. Peter Bailey recently made the announcement in Zambia during a meeting with Hichilema.

The US stated that the facility would “enhance military-to-military relations and expand areas of cooperation in force management, modernization and professional military education for the Zambian security forces.”

AFRICOM is one of the 11 unified combatant commands of the US Department of Defense. It is responsible for American military operations, including fighting regional conflicts.

Zambian opposition parties are outraged at the US’ military presence. The main opposition Patriotic Front (PF), the ruling party until Hichilema’s United Party for National Development (UPND) won polls, was among the first to express disquiet.

“The speed with which President Hichilema and the UPND government are turning Zambia into a colony or appendage of the West is a great source of concern to all well-meaning Zambians,” said PF Acting Secretary-General, Nickson Chilangwa.

PF maintains Hichilema must have sought consensus or consultations before the UPND government “unilaterally decided to station the US army on Zambian soil.”

“America is at war with several nations and allowing them to set up a military base here in Zambia directly puts Zambia in harm’s way with all those fighting with America,” Chilangwa said.

PF accuses Hichilema of relapsing into a dictator since his election.

The Socialist Party warned the establishment of an AFRICOM office in Lusaka was “dangerous.”

The opposition party noted, “The setting up of the new office escalates the role of AFRICOM in Zambia.”

It added, “Such a development has implications for the SADC defence initiatives and raises anxieties in the region.”

SADC is acronym for the Southern African Development Community (SADC), the first bloc to oppose the hosting of AFRICOM in the continent, in 2007.

“None of us is interested in hosting the command (AFRICACOM),” Mwanawasa said at the time.

The Socialist Party warned of a “real danger” of Zambia’s military doctrine being hijacked through the security cooperation with the United States.

It explained Zambia’s military doctrine as for a long time being a product of the country’s post-independence insights gained through international exposure, primarily China, Russia and Tanzania among others.

“It will be extremely dangerous and fatal to turn the Zambia military into some extended arm of the American military,” the opposition party stated.

The Catholic Church, the most widely followed and influential church in Zambia, has also waded into the issue.

The denomination has previously criticised the UPND-led administration of failure to fulfill poll promises pledged during election campaigns.

“It’s an abuse of office to engage foreign military agencies to our sovereign state without due consultation with the citizenry,” the Archbishop of Lusaka, Dr Alick Banda was quoted at a sermon this past weekend.

Government critics though ought to be careful with their sentiments around the issue, as far as the warning by the Minister of Defence, Ambrose Lufuma.

“We have had a longstanding relationship with US-AFRICOM in the areas of peacekeeping that has predated this administration and has benefited our military,” he said.

He said Zambia had “no intention whatsoever” of establishing or hosting any military bases.

“Therefore, the Ministry of Defence would like to take this opportunity to warn all perpetrators of such misinformation meant to tarnish our existing cordial relationship with our neighbours and strategic partners, to desist from issuing alarming statements which hinge on the security and territorial integrity of our nation,” Lufuma said.

Lufuma added: “Anyone who will be found wanting and spreading falsehoods will be dealt with in accordance with the laws of the country.”

Amid the apprehension in the region over the “office of security cooperation” Zimbabwe is reportedly among the most concerned.

The anxiety stems from a fallout with US, spanning over two decades.

admin11 hours agoMay 23, 2022
16
President Biden on Saturday signed legislation to support Ukraine with an additional US$40 billion in US assistance as the Russian...

admin14 hours agoMay 23, 2022
17
By Cyber Era NG Staff The “Kickoff” for the realisation of the Floating Storage and Regasification Unit (FSRU) of Liquefied...

Democratic Institutions And An Independent Media Are Our Strength In Times Of Crisis, OSCE Leaders Say

admin4 days agoMay 19, 2022
45
By Cyber Era NG Special Correspondent Human rights and democratic principles must continue to be the bedrock of societies across...

Russia Kicks CBC Out Of Moscow