What do people get wrong about AI and what are the biggest mistakes people make when it comes to big data?

ERIC LANDAU is the co-founder and CTO of Encord, the computer vision startup founded in 2020. The London-based venture leverages artificial intelligence (AI) to give companies of all sizes control of their data. It achieves this by providing the tools needed to annotate, automate, evaluate and manage big data sets.

The AI platform can automatically classify, detect, segment and track objects in images and videos. The solution the Encord CTO has helped develop also enables users to leverage AI to scan X-rays and CT scans. To date, the company has raised US$17m, most recently through a US$12.5m Series A round in October 2021.

In the latest Q&A in our CTO Talks series, the Encord executive tells  Verdict’s Eric Johansson what he thinks people get wrong about AI and the biggest mistakes people make when it comes to big data.

VERDICT: Tell us a bit about yourself – how did you end up in your current role?

ERIC LANDAU: I studied physics during my undergrad and then began a PhD before dropping out – sorry, I mean “taking a leave of absence.” I accepted a job in finance, which brought me to London, but after almost a decade, I wanted to try working on some new problems. I joined an entrepreneur network and that’s where I met Ulrik, my co-founder. We went for a couple of pints down at the local pub and Ulrik told me about his seed idea for Encord. I thought it was the best startup idea I had heard, better than the ones I had thought of at least.

VERDICT: Where did your interest in tech come from?

EL: When I was younger, I was more interested in basic science and physical principles. Only later did I also become interested in how we can apply these principles to actually achieve things in the real world. That’s essentially the layer we call “technology.”

VERDICT: What do people get wrong about AI?

EL: From the general public perspective, people think that AI is scientists’ attempt at creating consciousness. They conflate all AI with AGI, artificial general intelligence, which is not the focus for nearly all applications. As a result, people attribute some sort of magic to AI and if they thought of it as just an additional statistical technique, I think that would demystify a lot of the aura around it.

VERDICT: What are the biggest mistakes people make when it comes to big data?

EL: They don’t design things for scale. They think short-term about having success at the prototype or proof of concept stage. However, once they put the model into the development cycle, they realise a lot of those choices that they made to get the proof of concept up and running don’t work for a production system. They need systems that are robust and work for real-world use cases.

VERDICT: How do you separate hype from genuine innovation?

EL: By the value that the technology creates. If it works and creates concrete, tangible real-world value, then that is innovation. If you see a lot of venture money chasing a thing that never actually gets put into the real world, then that’s hype.

VERDICT: What one piece of advice would you offer to other CTOs?

EL: Think about the people, not just technology. A lot of CTOs are very technologically driven, but, really, they should think about investing in the people before the technology. The success of the company will be a function of the people that make up that company as opposed to the original technology that the company is based off of.

VERDICT: What’s the most surprising thing about your job?

EL: You have to wear a lot of hats. That’s something that I wasn’t expecting. We’re an early-stage company, and there’s a diverse set of tasks that need to be done. Also, people skills really matter because there’s a lot of people management.

EL: Like a lot of challenges, climate change depends more on our own behaviours than on technology, so changing our behaviours is the main lever we have to combat that challenge. However, a lot of interesting technologies are emerging, AI being one of them, to help tackle this challenge. Those solutions are not viable yet, but the technology can move. For instance, solar panel prices have fallen faster than anyone anticipated 10 years ago.

VERDICT: What’s the strangest thing you’ve ever done for fun?

EL: I launched a fake art gallery opening in a shady alleyway next to my old flat in London. There was no art: we were just showcasing the alleyway in a different way to contextualise that piece of the urban area. We made tickets, put it up on Tripadvisor and had an official opening where we invited a lot of people, including journalists and politicians. We had a red carpet and music, and people didn’t realise it was just an alleyway until they arrived.

VERDICT: What’s the most important thing happening in your field at the moment?

EL: A lot of people are starting to adopt the technology and put it into real world systems, which is great, but from an academic perspective, the most interesting developments come from this new self-supervised phase of machine learning, so having data learn from itself rather than having to label everything. The potential impact of those developments on the future of the field is very exciting.

VERDICT: In another life you’d be?

admin10 hours agoMay 23, 2022
21
More than 700 communities around the country have a combined sewer system, making them susceptible to overflow during heavy wet-weather...

admin4 days agoMay 19, 2022
40
The telco industry has been on a rollercoaster over the past two years as it has adapted to an ever-changing... 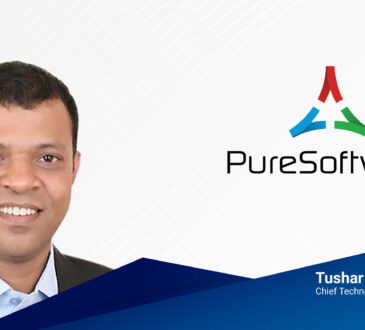 admin5 days agoMay 18, 2022
43
New-age market dynamics are disruptive. The deeper we understand our customers’ needs, the better we serve them, and the better...

admin1 week agoMay 16, 2022
56
World-renowned energy economist and Executive Director of the International Energy Agency FATIH BIROL is no stranger to nuclear power: He...