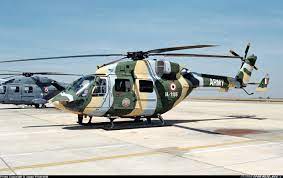 Analyst, Aerospace, Defense and Security at GlobalData Mathew George, Ph.D, offers his view: “HAL’s ALH Dhruv programme reached the 300th aircraft roll-out milestone in September 2020. Although the company had not made much progress in terms of exports with the platform, this may change with the new set of capabilities the Dhruv Mk III MR brings to the table.

“In trials, the missions conducted were surveillance, search and rescue, antipollution to address oil spillage etc, and with the multi-mission helicopter market in Asia-Pacific expected to grow by 1.9 per cent to reach US$1.25bn by 2030, there is a good chance that HAL can turn the tide around for exports for the Dhruv programme with a competitively priced offering.

“The significance of maritime trade in the region means countries are increasingly looking to secure their exclusive economic zones (EEZ), their maritime trade routes and borders. Not to mention the relevance of the Humanitarian Assistance and Disaster Relief (HADR) and Search and Research (SAR) responsibilities that fall to navies, coast guards and other bodies. HAL’s ability to modify and provide a version of the Dhruv that can operate in this domain and still be maintained and operated continuously, as tests have so far shown, will help diversify the options HAL has to take part in programs around the region and elsewhere.

“HAL has historically not limited their exposure to the Asia-Pacific, having exported Dhruvs to Ecuador previously. Although that wasn’t a successful programme, we can take away that HAL will not limit the possibilities for the Dhruv Mk III MR to the immediate neighborhood. If HAL can follow through with their statements on increased support via maintenance, repair and overhaul (MRO), we’d be looking at quite a competitive platform for the company.”

admin1 week agoApril 29, 2021
37
By Josephine Akaerr, Special Correspondent For Hortense Koné, the manager of a small restaurant in Abobo Belleville, north of Côte...

admin1 week agoApril 29, 2021
67
By Josephine Akaerr, Special Correspondent GE  has announced , on the World Day for Safety and Health at Work, the...