ROBYN GATENS tells ITU News about the past, present and future of the ISS, challenges and opportunities for space exploration, and what a bustling low-Earth orbit economy could look like.

ITU NEWS: These are exciting times for space exploration: more and more countries are establishing space programs and announcing missions to the Moon, Mars and beyond. What role has the ISS played in advancing human space exploration?

ROBYN GATENS:  Not only are more countries interested in space, but more interest is coming from the private commercial space sector as well.

One of the key missions for the International Space Station is to be a test bed where we can learn about the systems and effects on the human body that we will need to do these future missions beyond low-Earth orbit (LEO).

We need to develop those technologies and do that human research so that we know how to keep crews healthy.

IN: Do you see the role of the ISS changing over time?

RG: We are entering our third decade on ISS. Our first decade was all about assembly, which we completed in 2011. The last decade had us learning how to use and expand those capabilities on the space station to do research.

More crew means we can do more research.

We have more partners participating, both international and commercial. All that adds up to really maximizing its full potential.

IN: What challenges do you anticipate for the ISS as more countries have commercial operations head to space?

RG: We have limited flight opportunities, even with more vehicles and limited space on the space station to do things. But as we and other countries expand our commercial capabilities, there will be more opportunities.

One of the areas we are seeing promising markets for is tourism: flying astronauts from sovereign nations.

That’s going to be a promising market for these private companies that want to have platforms in low-Earth orbit. So I think it’s a challenge, but also an opportunity.

IN: Does the ISS ever experience interference issues? Are you concerned about the growing number of LEO satellites that will be put in service in the next few years?

RG: With the growing number of commercial radio satellites and constellations, it does increase our efforts to ensure there is no interference with the space station.

We work closely with the Federal Aviation Administration (FAA) and [satellite] providers when they’re doing their launches to ensure that we stay out of each other’s way. We have had to do some avoidance manoeuvres occasionally to avoid some objects, but that’s pretty rare.

IN: What does a low-Earth orbit economy look like?

RG: One day we will retire the space station. It won’t last forever.

So, we are doing all we can to enable a future where we have privately-owned and operated platforms from which NASA (the US National Aeronautics and Space Administration) and other countries and entities can purchase services for what we need to do in low-Earth orbit. We want to be one of many customers. Our vision for a low-Earth orbit economy is multiple human or human-tended, commercially-owned and operated platforms

IN: How has the COVID-19 pandemic affected human spaceflight over the past year?

RG: Initially our on-site work was restricted. The non-critical projects were delayed because we couldn’t bring people on site to do hands-on work. Critical projects have been remarkably successful, though. The teams have found a way to safely continue, such as multiple mission control rooms: they work from one while cleaning the next one and do shifts that way. Now that people are really starting to get vaccinated, I think things will get easier.

IN: In your new role, if you get a chance to go to space, would you like to?

RG: I would love to, sure. But I’m also happy at this point to enable others to go. At this point in my career, I’m probably destined to stay on the ground. But we’ve got a whole cadre of younger astronauts!

IN: What role does international cooperation play in space services, and how do you see the contribution of organizations like ITU?

RG: No one country can do everything by themselves. If we’re going to explore space, we need to do it together. Partnerships are very critical.

Groups like the ITU not only provide collaboration opportunities, but also develop important interoperability standards.

Different countries bring contributions, and we know that they’ll plug and play together. That’s really important to enable everyone to participate, and it also drives global commercial partnerships. 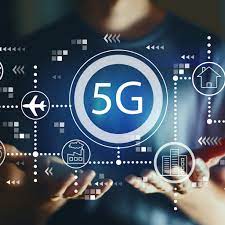 What’s The Point Of 5G If The Latency Is Lost In The Middle? ‘Data Is Baggage, Otherwise’

admin7 days agoMay 3, 2021
19
DHEERAH REMELLA tells James Blackman a new way of managing data, is needed for businesses to survive and thrive in...

admin2 weeks agoApril 23, 2021
78
As the Internet of Things proliferates, the deployment of smart cities and spaces is more exciting than ever.  SANJEET PANDIT...

Private 5G Network KPIs And Management SLAs – Who Wants What From Industrial 5G?

admin2 weeks agoApril 23, 2021
64
US-based Federated Wireless has watched at close quarters as US enterprises have piled into the CBRS band to deploy private...

How 5G And MEC Are Transforming Healthcare

admin2 weeks agoApril 22, 2021
94
While IoT has become a household term, IoMT or the Internet of Medical Things, isn’t as well known. IoMT represents...