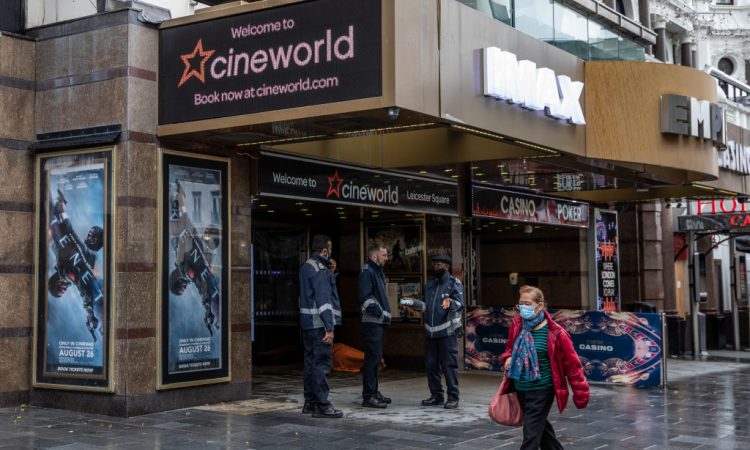 LONDON, ENGLAND - OCTOBER 05: Members of the public walk past the Cineworld cinema in Leicester Square on October 05, 2020 in London, England. The movie theatre chain confirmed closure of 127 cinemas in the United Kingdom and and 536 in United States. The company said that, as the industry grapples with the Covid-19 pandemic, it cannot provide its customers with the "breadth of strong commercial films necessary for them to consider coming back to theatres." (Photo by Dan Kitwood/Getty Images)
121views

The CEO of UK arthouse cinema chain Curzon, Philip Knatchbull has said that it is time for movie theatres to embrace streaming services.

Speaking to the FT, Knatchbull said that cinemas will not survive unless they move away from the industry’s “outdated” model and re-evaluate the nature of long theatrical windows.

He said: “[the pandemic] released an enormous pent-up demand for change that had been held up by outdated business models predicated on a large number of admissions.”

Cinemas have struggled to handle the health crisis due to the lack of new films being released. Christopher Nolan’s Tenet, while performing well internationally, made just over US$40 million in the US. The film’s inability to get audiences back in seats – partly due to the fact that cinemas in major cities like San Francisco and New York still remain shut – caused MGM to push the latest James Bond film to 2021 and Disney to delay the release of Marvel feature Black Widow.

That James Bond-shaped hole caused Cineworld, the world’s second-largest cinema chain, to close all of its US and UK screens, while Odeon operator AMC has reduced its hours and warned that it could run out of money by the end of 2020.

By contrast, Disney’s decision to pull Mulan from cinemas altogether in favour of making the film a premium purchase on Disney+ reportedly made the company more than US$250 million in the US within a week.

Many other films initially planned for theatrical release have, throughout the pandemic, shifted digitally instead. Warner Bros. put the likes of Scoob! and Witches on HBO Max, while Universal offered a number of its films as TVOD rentals, and Disney has said that the next Pixar film Soul will be released on Disney+ on Christmas day.

The Curzon CEO said that cinema operators have been overly reliant on driving footfall by holding onto long exclusive theatrical windows, adding that consumers should be able to watch new releases online soon after they debut in cinemas.

Curzon has long been a proponent of film streaming. It offers films to rent and buy digitally via its website – often day-and-date with their theatrical release. This is aided by Curzon Artificial Eye (formerly Artificial Eye), the film distribution business bought by the cinema chain in 2006. The distributor released the Academy Award-winning Parasite in such a manner earlier this year.

Curzon also offers its cinema members an added benefit – dubbed Curzon 12 – which provides access to a curated playlist of a dozen classic and new films updated on a monthly basis.

The cinema chain also has a deal in place with Netflix to show a number of its films on the big screen when they are released, with recent examples including Uncut Gems, The Irishman, Marriage Story and The Laundromat.

The company however is a much different beast to the likes of AMC and Cineworld, and can afford to be more experimental in its approach due to only having to run 13 cinemas. Knatchbull said that while Curzon’s cinemas are at 20 per cent of their 2019 level, its streaming business saw a 500 per cent increase in revenue during the peak of lockdown, with overall 2020 figures up 300 per cent year-over-year. https://www.digitaltveurope.com