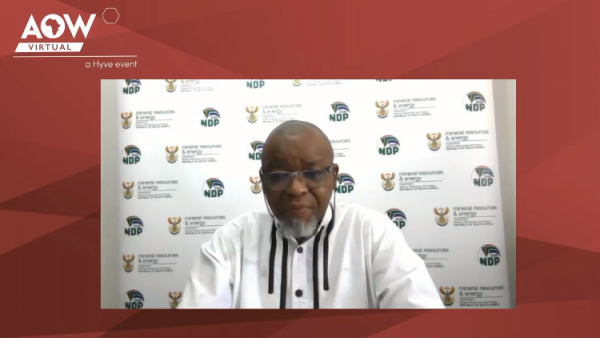 Hon. Gwede Mantashe opened day two of AOW Virtual (7-8 October), an online summit from the team behind Africa Oil Week. Minister Mantashe’s address reflects the importance of South Africa’s role in the Africa Oil Week community, as the conference’s host nation for its 26 editions. The goal of AOW Virtual was to reignite the African upstream following a tumultuous year that has featured unprecedented supply and demand shocks in the sector.

In his address, Minister Mantashe did not shrink from addressing the devastating effects of COVID-19 on South Africa, having only recovered from the disease himself a few months previously. Though South Africa allowed the energy sector to operate at full capacity following the nationwide lockdown, a decrease in demand for petroleum products over an extended period meant some refineries were still forced to close.

Despite this, Minister Mantashe stressed that the tide now looks to be turning, following further relaxation of lockdown restrictions in South Africa as it heads into Summer. He cited recent “rapid increase in demand” for petroleum products in the country, which is now leading to the converse problem of shortages in some areas.

The Minister’s address left no doubt that The Department of Mineral Resources & Energy (DMRE) views the energy sector as a catalyst for economic recovery and future growth in South Africa. The Petroleum Resources Development Bill will play a crucial part in this, and in the Minister’s plan to reduce the country’s dependence on hydrocarbon imports. On the recently published Bill, Mantashe commented “We have had consultations with a broad range of stakeholders. Our intention is to have the Bill finalised; to attract investment and ensure synergy between oil and gas activities and our nation’s environment and water resources”.

Indeed, the Bill seems to already be yielding positive results for E&P in South Africa. Minister Mantashe cited a predicted spend of 1.5 billion Rand by Total on drilling offshore Mossel Bay, whilst Saudi Aramco have been engaged to conduct a pre-feasibility study into a crude oil refinery in Richards Bay.

Finally, in line with other sessions at AOW Virtual, natural gas emerged as a key theme in Minister Mantashe’s address. Speakers worldwide were excited about gas projects across Africa and the role of gas as a bridging fuel in the energy transition. Minister Mantashe commented: “We are re-positioning South Africa to be a serious player in the global gas market. We will promote the development of a domestic and regional gas market. We continue to advance our Gas to Power projects with the Coega Special Economic Zone (SEZ) identified as the first Liquefied Natural Gas (LNG).

admin13 hours agoNovember 28, 2022
28
firsNicaragua's telecoms regulator Telcor started planning for a 5G roadmap. The t measure has to do with the reservation of...
POLITICAL ECONOMY