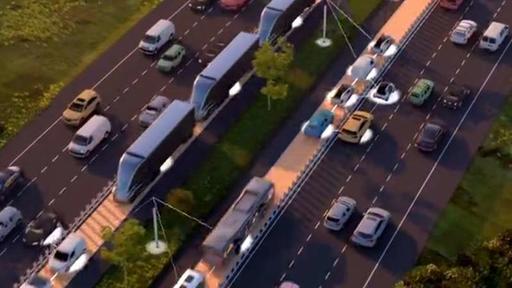 A future stretch of road between Detroit and Ann Arbor, Michigan, will be home to road lanes marked exclusively for self-driving cars in the future.

The state and private partner Cavnue announced Thursday the creation of a new public-private duo to build the first kind of autonomous car corridor in Southeast Michigan to help accelerate testing. Eventually, the end goal is to close “long-standing gaps” to transportation access in the area.

Although the lanes will first be a testbed for autonomous vehicles, the state and Cavnue want to future-proof the project. As self-driving cars grown smarter, the lanes may adapt to welcome different kinds of vehicles, such as large freight movers and more. Cavnue mostly envisioned smaller people-mover-type vans at first for these lanes, but the project has already attracted other large names.

Ford, General Motors, Waymo, Argo AI, Toyota, Honda, TuSimple, BMW and more have all signaled support for this public-private project. Each will work with Cavnue to develop an advisory committee to draw up neutral standards for how to implement the corridor so no OEM nor company benefits more than the other.

This is a far-reaching project that we likely won’t see materialize for years. Phase one will focus on testing and roadway designs for these lanes and should last two years. Construction will be part of “future phases” to be determined following phase one. Cavnue reaffirmed with Roadshow these lanes will be used only for autonomous vehicles with no traditional traffic permitted. A rendering from Cavnue depicts the lanes as walled off from “standard traffic” and shows what the future of highway could look like.

admin2 days agoJanuary 18, 2021
23
By Catherine Sbeglia With mere days left in office, President Donald Trump and his administration have added nine Chinese companies, including smartphone maker Xiaomi, to a list of firms suspected to be owned or controlled by China’s military. When placed on the list, the companies become subject to harsh restrictions and cannot benefit from American investment. Xiaomi recently took Apple’s place as the world’s third largest smartphone maker, according to market intelligence firm IDC, but with this latest news, the company saw its stock fall more than 10 per cent...

admin4 days agoJanuary 16, 2021
45
And All Lenders On Tuesday, January 19 By Godson Umejiego, Correspondent USA The US Small Business Administration, in consultation with the US Treasury Department, will re-open the Paycheck Protection Programme (PPP) loan portal to PPP-eligible lenders with US$1 billion or less in assets for First and Second Draw applications on Friday, January 15, 2021 at 9 am ET. The portal will fully open on Tuesday, January 19, 2021 to all participating PPP lenders to submit First and Second Draw loan applications to SBA. Earlier in the week, SBA granted dedicated...