In testimony before the Senate Committee on Banking, Housing, and Urban Affairs  June  23, Export-Import Bank of the United States (EXIM) President and Chairman Kimberly A. Reed highlighted progress over the past year on a range of agency priorities.

“It has been nearly one year since I last had the honor of appearing before this Committee,” Reed said in her prepared testimony. “At that hearing, I shared with you my priorities that I also conveyed to my colleagues on my first day of work at EXIM: Being committed to fully reopening, reforming, and reauthorizing EXIM, thereby providing positive results for America’s workers and businesses, while protecting America’s taxpayers.”

Reed added, “With EXIM back in full operation, we have been very focused on communicating to all of our stakeholders—including exporters and potential exporters especially in the small business community, private sector lenders whose loans EXIM can guarantee, and prospective foreign buyers—that the agency is now able to offer all of its financing options to support US exports.”

“Your efforts to follow through on your commitment to transparency, accountability, and reform have not gone unnoticed by me and by my colleagues on this Committee,” said panel Chairman Mike Crapo (R-Idaho). “I commend you for those efforts and encourage you to continue them.”

“This is a critical time for EXIM,” said Committee Ranking Member Sherrod Brown (D-Ohio), urging his colleagues to approve the EXIM nominees pending before the full Senate. “I think EXIM has an effective management team. Thank you for that Ms. Reed – but you should be able to operate at full capacity during an unprecedented crisis, not still missing two members with critical expertise.”

Reopening EXIM: Supporting American Jobs by Facilitating US Exports – In Fiscal Year (FY) 2019, EXIM authorized a total of US$8.2 billion in financing that is estimated to support 34,000 US jobs, more than double its financing in the previous fiscal year. According to preliminary numbers, in FY 2020 EXIM has authorized US$1.7 billion in financing that is estimated to support 10,900 US jobs, with additional transactions under and expected to reach the Board for consideration and potential final approval this fiscal year. Additionally, EXIM’s Board also approved four preliminary commitments totaling US$1.1 billion in financing over the past year. Altogether, EXIM has more than US$39 billion in Board-level transactions that are undergoing various stages of due diligence and underwriting and are estimated to support 147,000 US jobs. Reed noted “significant demand” for Letters of Interest, which are a pre-export tool to help US  exporters compete during the bidding or negotiating of an export sale, and pre-application stage conversations are occurring with many companies.

Reforming EXIM: Transforming the United States’ Official Export Credit Agency – Reed summarized a wide variety of transparency, governance, and operational reforms. Most notably, after an eleven-month, transparent review process—with input from the public and other US government agencies, two public EXIM Advisory Committee meetings, chaired by former Congressman Stevan Pearce and featuring experts with diverse views, and independent third-party review—EXIM’s Board of Directors unanimously adopted reforms to the agency’s policies and procedures for economic impact and “additionality” – the reason why a transaction could not go forward without EXIM financing – on May 22, 2020.

Supporting US Small Businesses – EXIM is taking action to boost its small business engagement to achieve its new 30 per cent small business mandate set by Congress. Reed directed agency staff to embark on five initiatives to reach and equip US small businesses to compete in the global marketplace: Outreach and Education; Resources for Underserved Markets; Working with Private Sector Partners; Increasing Ease-of-Doing-Business; and Improving Transparency. Thus far in FY 2020, EXIM has authorized 1,159 small business transactions for a total of US$985 million. This represents 89 per cent of EXIM’s total authorizations and 53.7 per cent of the total dollar value of authorizations fiscal year to date.

Programme on China and Transformational Exports – As part of implementing its historic reauthorization, Reed underscored that EXIM is very pleased to have the new Congressional mandate to establish a programme to compete with China and counter its opaque and exploitative model of economic development and finance. EXIM is actively working to establish the “Programme on China and Transformational Exports” – one of the agency’s most significant efforts in its 86-year history to help level the playing field for American businesses and workers against fierce Chinese competition. Reed noted that EXIM is expeditiously addressing policy and legal issues necessary to compete successfully and working through a resource assessment to ensure the Programme is fit for purpose.

Preview of Upcoming 2020 Competitiveness Report – During the hearing, Reed previewed EXIM’s upcoming June 2020 Report on Global Export Credit Competition of the Export-Import Bank of the United States (Competitiveness Report) for Calendar Year 2019 that EXIM will submit to Congress at the end of June.

Reed stated, “The world now has 115 known official export credit providers, up from 85 just four years ago. When it comes to export credit financing, China is fundamentally changing the nature of competition. China is very aggressive, strategically focused, and, unlike the United States and many other countries, not subject to the same international rules and agreements. From 2015 to 2019, China’s official medium- and long-term export credit activity alone was at least equal to 90 percent of that provided by all G7 countries combined.”

Reopening America: EXIM’s Swift Response to the Economic Challenges of COVID-19 – EXIM’s workforce quickly transformed into a temporarily fully teleworking agency, in order to better assist American exporters and financial institutions dealing with the painful financial pressures brought on by the pandemic. On March 12, EXIM announced temporary relief measures for current customers including extended waivers, deadline extensions, streamlined processing, and flexibility due to the anticipated effects of the COVID-19 outbreak. EXIM later announced four temporary initiatives to address the targeted needs experienced by exporters and private sector lenders. Its enhanced Supply Chain Financing Guarantee Programme and Working Capital Guarantee Programme alone have already attracted more than US$870 million of financing requests from US businesses. Finally, the EXIM Board of Directors temporarily suspended the availability of its financing for certain medical supplies and equipment necessary to treat and prevent the spread of COVID-19 that are in short supply in the United States.

“These are difficult times for many American businesses, workers, and their families. As we focus on America’s economic comeback, EXIM remains committed to our mission of supporting American jobs by facilitating US exports,” Reed concluded. “It is a point of pride for EXIM’s diverse and talented colleagues that we are a rare civilian agency within the federal government that both supports large numbers of private sector American jobs and plays a critical role in advancing US leadership around the world.”

admin2 days agoDecember 1, 2022
27
By Andy Fry German PayTV platform Sky Deutschland is dropping Disney-based documentary channels National Geographic (NatGeo) and NatGeo Wild from its platform in January 2023, according to reports in German publication DWDL. The move has been interpreted as a desire by Sky Deutschland to thin out its existing channel line-up and focus more effort on its own channels, but it is also likely to be linked to Disney+’s ambitions in German-speaking markets. The streaming platform has been available via Sky Deutschland’s services for the last two years. Sky Deutschland VP...
CORPORATE GOVERNANCE

admin2 days agoDecember 1, 2022
18
By Andy Fry Paramount is the latest US media group to start laying off staff. After a steady stream of restructuring news from Warner Bros Discovery, Walt Disney and AMC Networks, Paramount has started shedding employees in business affairs, legal, casting and production. Flagship TV Studios CBS Studios and Paramount TV Studios will both see cuts and the Paramount+ scripted originals team has been folded into the latter. As yet there is no news on whether the volume of Paramount+ orders will be affected. In a memo to staff, CBS...
CORPORATE GOVERNANCE

admin3 days agoNovember 30, 2022
36
By Richard Middleton Amazon Studios has restructured operations at MGM, with Jennifer Salke taking overall control of The Handmaid’s Tale studio and new roles for Rola Bauer and Lindsay Sloane. MGM’s Bauer, who had been president of international TV, becomes head of pan English scripted SVOD TV, and Sloane – previously SVP of scripted TV – becoming head of MGM US scripted TV. The duo report into Amazon Studios head of TV, Vernon Sanders, who in turn reports to Salke. Sanders, who has been behind the rejig, is also moving... 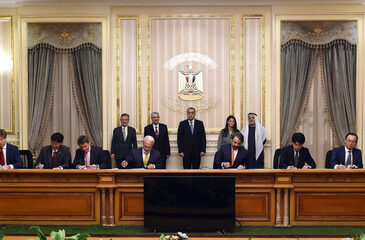 AMEA Power Completes US$1.1 Billion Deal To Deploy 1GW Of Wind And Solar Energy In Egypt