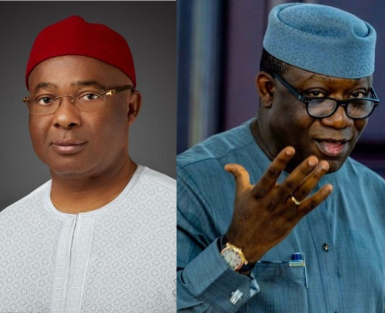 The decisions by some leaders  of governments at the sub-national level in Nigeria to implement the harmonized and approved right of way(RoW) charges  payable by telecommunications companies have received commendation from  the Association of Telecommunications Companies of Nigeria(ATCON).

ATCON information, seen by Cyber Era and inked by its Executive Secretary, Ajibola Olude, says the organization “ is pleased to commend the recent pragmatic Executive Orders issued by Dr. Kayode Fayemi, Executive Governor, Ekiti State and Chairman, Nigeria Governors’ Forum and Senator Hope Odidika Uzodinma, Executive Governor, Imo State and their respective State House of Assemblies for the implementation of the approved right of way price from a very exorbitant price to an industry and investment friendly price of N145 per linear meter approved by the Federal Government.

Olude said ATCON also appreciated these states for considering its letter, which was sent to them in the beginning of the year, recommending that telecommunications and ICT infrastructure must be seen and treated as a component of development in their respective states.

According to the ATCON Executive Secretary, with this move by the governors, their leadership had attested to the fact that the socio-economic development of their respective states was not mutually exclusive to broadband and ICT infrastructure development, which had been one of the basis of ATCON’s advocacy initiatives.

According to Olude, some of the benefits that are accruable to states that adopted and implemented the harmonized Right-of-Way price are as follow:

Commented he:  “We use this opportunity to advise those States that have not implemented the approved and harmonized Right-of-Way price of N145 per liner meter,  to take a clue from these States and together telecom and ICT infrastructure will speed up the needed development in Nigeria.

Once again, we deeply appreciate the governors and House of Assemblies of these States for making their respective States a strategic partner of our initiative to ensure that all states in Nigeria have pervasive network coverage and seamless access.”

admin3 days agoJanuary 31, 2023
53
The fast socioeconomic development in Bangladesh during the last decade has accelerated the demand for energy, leading to the need...

admin7 days agoJanuary 27, 2023
49
By Michael Brennan The Swedish ambassador to Ireland has promised to look into the case of an Irish whistleblower who...
bahis canlı casino siteleri canlı bahis siteleri