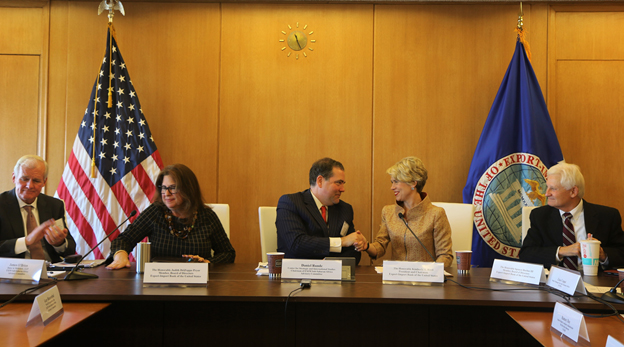 President and Chairman of the Export-Import Bank of the United States (EXIM) Kimberly A. Reed  has met  via teleconference with US Ambassador to the African Union(AU) Jessica Lapenn to address how EXIM can help American businesses export their “Made in the U.S.A.” goods and services to the African continent.

During the meeting, Chairman Reed and Ambassador Lapenn discussed the COVID-19 global pandemic response wherein more broadly, they also underscored the importance of engagement with the African Development Bank(AfDB), the African Export-Import Bank, and other institutions in the region.

Building on their meetings and roundtable with US and African business leaders, government officials, and stakeholders that took place in Pretoria, South Africa in May 2019 when Chairman Reed led the US Presidential Delegation to the inauguration of President of the Republic of South Africa, Cyril Ramaphosa Chairman Reed and Ambassador Lapenn pledged to continue to work together to advance US exports to Africa, which create economic growth and prosperity in both the United States and Africa.

They also reviewed EXIM’s historic seven-year Congressional reauthorization, which, in part, establishes a new programme on China and Transformational Exports to support the extension of loans, guarantees, and insurance, at rates and on terms and other conditions, to the extent practicable, that are fully competitive with rates, terms, and other conditions established by the People’s Republic of China.  The programme has the aim of supporting US innovation, employment, and technological standards through direct exports globally, including to Africa, in ten transformational export industries, such as wireless communications, biomedical sciences, biotechnology, renewable energy, and water treatment and sanitation.

EXIM has a legislative mandate to support projects throughout sub-Saharan Africa and participates the US government’s Prosper Africa programme and the President’s Advisory Council on Doing Business in Africa (PAC-DBIA). The agency also receives guidance and advice from the congressionally mandated Sub-Saharan Africa Advisory Committee regarding EXIM policies and programs designed to encourage the expansion of financing support for U.S. manufactured goods and services in sub-Saharan Africa.

Meanwhile, Chairman Reed has concluded a series of teleconference listening sessions with 30 of EXIM’s delegated authority lenders, discussing EXIM’s temporary relief measures and other efforts to protect both exporters and the taxpayer during the COVID-19 pandemic.

“EXIM’s delegated authority lenders are critical to the success of US exporters, especially during this challenging time,” said Chairman Reed. “We have worked closely with the private sector to ensure that EXIM efforts to combat the financial impact of COVID-19 provide the necessary relief for our customers and the financial institutions we partner with.”

Many lenders expressed appreciation for the swift and helpful actions EXIM has taken to date.

It will be recalled that on March 12, EXIM announced initial relief measures – waivers, deadline extensions, streamlined processing, and flexibility – for its working capital loan guarantee and export credit insurance programs to its customers, primarily US small businesses, that now have been extended through May 31.

EXIM also expedited a change in the fee structure of Delegated Authority and Fast Track Loans to give small businesses better transparency into the fee structure and lower the fee rate by an average of 10 basis points(bps).

admin3 days agoFebruary 1, 2023
49
First Convening of Department-wide Equity Councils The US Department of Commerce has convened  the first Congress of Diversity, Equity, Inclusion...