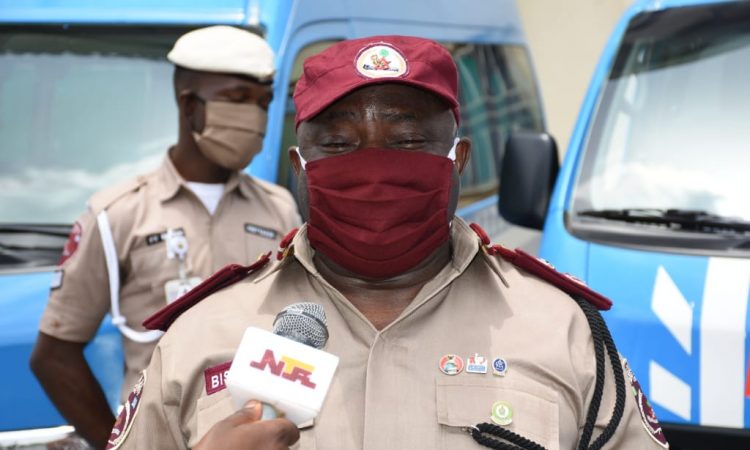 Road safety regulator in Nigeria, the Federal Road Safety Corps(FRSC) has apprehended a total of 396 vehicles conveying over 2,422 passengers in the general operation area of its 12 Zonal Commands across the country, for indiscriminate violation of Presidential directives on physical distancing in vehicles.

According to the Corps Public Education Officer,  Corps Commander Bisi Kazeem, who made this known to newsmen, the highest number of arrests were recorded in the following states; Rivers,  Enugu and Kwara, while Ekiti and Niger States recorded the least number of arrests.

Others are; Kaduna and Bauchi with 16 arrests each, Ebonyi 14 while Lagos and Ondo, respectively recorded a total of 11 arrests.

Kazeem also explained that from the data made available by the 12 Zonal Commands,  it was gathered that out of the 396 vehicles arrested, 343 were impounded for conveying a total of 2,442 passengers which completely violated the physical distancing order while the remaining 63 vehicles were arrested for overloading the vehicles with goods.

In order to ensure that the maximum precautionary measures are adhered to in those vehicles, the Corps Public Education Officer revealed that, out of the 2442 commuters, a total of 927 were discharged from the vehicles to make room for spacing and distancing amongst the passengers.

Consequently, Kazeem quoted the Corps Marshal, Dr. Boboye Oyeyemi as saying that the Corps was deeply committed to doing everything within its operational powers to help the PTF bring down the curve of the rising pandemic in the country and enforcing compliance in this regard was key to curtailing the spread of the virus.

He charged the Commanding Officers to sustain the tempo and intensify efforts to ensure that motorists were compelled to comply with Presidential directives on both the social distancing and inter states border restrictions on movement.

He, however, called on the motoring public to avoid boarding overloaded vehicle at all times and also warned commercial drivers to desist from such violations or face the wrath of the law.

admin1 day agoDecember 1, 2022
44
By Andy Fry French competition body, the Autorité de la Concurrence, has rejected discrimination complaints from pay TV broadcasters Canal+ and beIN Sports regarding the award of live Ligue 1 broadcast rights to Amazon last year. The Autorité cited lack of sufficient evidence that rights holder the LFP had acted improperly in doing the deal. Amazon secured the rights in question after the LFP and Mediapro agreed to end a pre-existing contract early. This allowed Amazon to step in and secure a three-year deal (2021/22 to 2023/24) for €250m(US$263.13million) per...

admin2 days agoDecember 1, 2022
30
By Godson Umejiego, Bureau Chief The Federal Deposit Insurance Corporation (FDIC) has issued the lists of institutions scheduled for a...

admin5 days agoNovember 28, 2022
49
Latin American telecom regulators are seeking to create clearer rules for the use of non-licensed spectrum, as disputes between mobile...