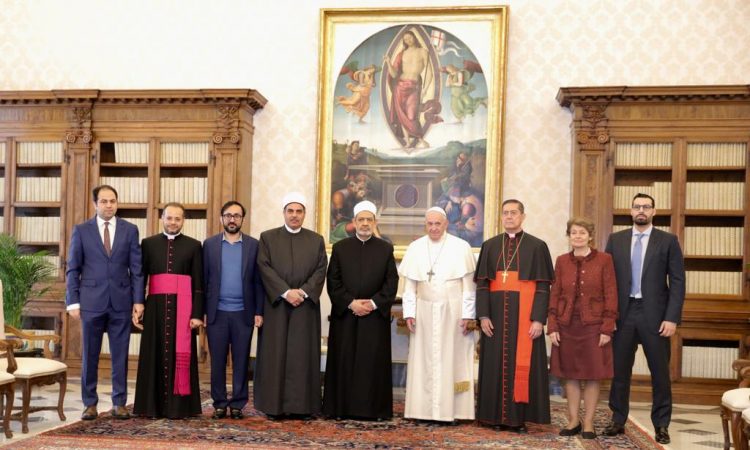 The Higher Committee of Human Fraternity (HCHF), called on religious leaders and faithful around the world to a day of fasting, prayers and supplications for the good of all humanity on Thursday May, 14for an end to the novel coronavirus (COVID-19) pandemic.

The call is part of the Committee’s (HCHF) efforts to realize the objectives of the Document on Human Fraternity. It invites people around the world to lay all their differences aside and come together and assume their responsibilities against this virus, the first and true enemy of humanity in this era.

Judge Mohamed Abdel Salam, Secretary-General of the HCHF Committee said: “The overwhelming response with this call for prayer from leaders and peoples around the world is a true testament to human solidarity and grants us hope in achieving global unity based on human fraternity principles for the safety, security and health of all mankind.”

He also noted that seeing all believers come together in prayers and supplications for an end to this pandemic is dream come true of a universal human unity, which is much needed now more than ever. “We will implore God Almighty for his grace and mercy and trust that He will respond to the hopes of millions of faithful asking to be saved from this deadly pandemic,” he continued.

US-based Rabbi M. Bruce Lustig, Senior Rabbi at Washington Hebrew Congregation and member of the Committee added: “Just as all of us have seen how the global pandemic has taken lives and livelihoods, we have also witnessed it reveal some of the best qualities in humankind.”

Monsignor YoannisLahziGaid, Personal Secretary of His Holiness Pope Francis and member of the Committee, Monsignor Yoannis Lahzi Gaid said:“As we await a cure that would spare humanity from this deadly pandemic, our only hope is that God Almighty will save the millions suffering around the world, and help scientists and researchers to succeed in finding the eagerly-awaited cure.”

The HCHF seeks to bring humanity together in prayer on Thursday, May 14, in what will be the largest gathering of humanity for one goal. The event will be accompanied by unprecedented media coverage, through the Committee’s social media accounts with two hashtags in Arabic and English, #صلاة_من_أجل_الإنسانية and #PrayForHumanity to allow people to interact and share their videos, photos and posts.

The Committee is an independent body of religious leaders, educational scholars and cultural figures from across the world, dedicated to achieving the noble goals of the the Document on Human Fraternity signed by Pope Francis and Sheikh Ahmed el-Tayeb, Grand Imam of Al-Azhar, during the Pope’s Apostolic Journey to the United Arab Emirates in February 2019, under the patronage of H.H Sheikh Mohammed Bin Zayed Al Nahyan, Crown Prince of Abu Dhabi and Deputy Supreme Commander of the UAE Armed Forces.

admin2 days agoNovember 26, 2022
37
The coordination of emergency preparedness related to critical information and communications technology infrastructure will be assigned to the National Cyber Security Director. The Ministerial working group on developing the digital transformation, the data economy and public administration endorsed the matter on November 25. Critical ICT infrastructure means, for example, public communications networks and cables. Preparedness relating to this infrastructure is highly regulated and functions well. Responsibility for preparedness is divided between several authorities, and the ministerial working group’s decision will enhance the coordination of preparedness. “Our changed security environment emphasises...

admin6 days agoNovember 23, 2022
43
By Andy Fry After months of uncertainty, the future is looking bleak for French SVOD platform Salto. Over the weekend,...
DISASTER MANAGEMENTFEATURES

admin2 weeks agoNovember 18, 2022
38
By ITU News A powerful tropical hurricane ripped across Nicaragua earlier this month, with torrential rains triggering life-threatening flash floods and mudslides across the Central American country. The Category 1 storm forced 13,000 people to evacuate to shelters, according to some reports – many with only the clothes on their backs. “The river rose one metre in ten minutes,” according to eyewitness José Domingo Enríquez of the interior town El Rama, one of the worst-affected. “It was clear the flood was coming fast, and we had to find a way...
bahis canlı casino siteleri canlı bahis siteleri