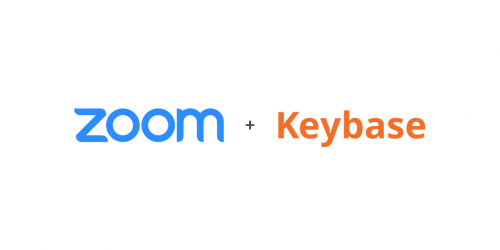 Zoom announced May 8 that it has acquired Keybase, a startup with encryption expertise, without  revealing the purchase price.

Keybase, which has been building encryption products for several years including secure file sharing and collaboration tools, should give Zoom some security credibility as it goes through pandemic demand growing pains.

The company has faced a number of security issues in the last couple of months as demand as soared and exposed some security weaknesses in the platform. As the company has moved to address these issues, having a team of encryption experts on staff should help the company build a more secure product.

In a blog post announcing the deal, CEO Eric Yuan  said they acquired Keybase to give customers a higher level of security, something that’s increasingly important to enterprise customers as more operations are relying on the platform, working from home during the pandemic.

“This acquisition marks a key step for Zoom  as we attempt to accomplish the creation of a truly private video communications platform that can scale to hundreds of millions of participants, while also having the flexibility to support Zoom’s wide variety of uses,” Yuan wrote.

He added that that tools will be available for all paying customers as soon as it is incorporated into the product. “Zoom will offer an end-to-end encrypted meeting mode to all paid accounts. Logged-in users will generate public cryptographic identities that are stored in a repository on Zoom’s network and can be used to establish trust relationships between meeting attendees,” he wrote.

Under the terms of the deal, the Keybase  will become a subsidiary of Zoom and co-founder and Max Krohn will lead the Zoom security engineering team, reporting directly to Yuan to help build the security product. The other almost two dozen employees will become Zoom employees. The vast majority are security engineers.

It’s not clear what will happen to Keybase’s products, but the company did say Zoom is working with Keybase to figure that out.

Keybase was founded in 2014 and has raised almost US$11 million according to Crunchbase data.https://techcrunch.com

admin7 days agoNovember 28, 2022
68
During a press conference, a Kaspersky security researcher shared with us his predictions for the coming year regarding the most...
CYBERSECURITY

admin2 weeks agoNovember 24, 2022
60
An autonomous cybersecurity platform company, SentinelOne has announced its intent to participate at Cairo ICT 2022 from 27-30 November, and will highlight its cutting edge autonomous extended detection and response (XDR) platform, and identity and credential protection solutions. Cairo ICT is a key technology fair and forum for the Middle East and Africa region. The 26th edition is being held under the slogan ‘Leading Change’ and will focus on several topics: innovative solutions for modern data centres; 5G & IoT; cybersecurity; digital transformation and global digital government transformation. The topics...